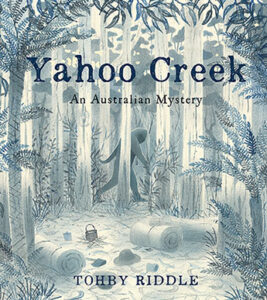 ‘He was surprised to observe a hairy human form, about seven feet in height, walking in the bush.’ Queanbeyan Age, 24 August 1886

Throughout the first century or so of Australian settlement by Europeans, the pages of colonial newspapers were haunted by reports of a bewildering phenomenon: the mysterious yahoo or hairy man. But what was it? Yahoo Creek breathes life into this little-known piece of Australian history – which, by many accounts, is a history still in the making.

‘These stories are not my stories or your stories, they’re our stories.’ Peter Williams, Ngiyampaa Elder

Yahoo Creek: an Australian Mystery seeks to capture, in the pages of a book, the strange, yet persistent phenomenon of encounters with hair-covered, human-like creatures in Australia’s Great Dividing Range.

In an innovative approach to history and storytelling, the text of the book is constructed entirely of extracts from early newspaper reports – drawing on an archive compiled by the author of over seventy unique articles from early newspapers – juxtaposed with the words of Aboriginal Elder Peter Williams, who shared knowledge on the subject with the author, and his point of view on the colonial encounters.

These texts are arranged thematically to build up suspenseful delivery of the information about the phenomenon. The expansive black and blue duotone artwork (created using stencils, stamps and inkpads) is intended to amplify the mood and mystery of the stories.

Colonial Australians often called the creature a ‘yahoo’, but terms such as ‘bush ape’, ‘man-shaped beast’, ‘Australian gorilla’ and ‘an Australian hairy man of the woods’ also appear in newspaper reports. It wasn’t until the late 20th century that the term ‘yowie’ became popular. Aboriginal people call it the ‘hairy man’ or have names for it in their own languages. Interestingly, many early place names along the Great Dividing Range, often in remote forests and rugged terrain, used the word ‘yahoo’. Names such as Yahoo Peak, Yahoo Range, Yahoo Gully, Yahoo’s Point, Yahoo Hill and more. Yahoo Creek is used at least five times, hence the book’s title.

RESOURCE
Notes on the Making of Yahoo Creek: an Australian mystery [PDF]