My Uncle’s Donkey was a very hard book to make. Simple is hard! Like the donkey trying to hide behind the curtain on page 10, there’s nowhere to hide a problem in a simple, minimal illustration. Or in a simple text, for that matter. That’s why the book hung around in my notebooks and files for about ten years.

The idea grew out of a story I made up while chatting to my three-year-old niece, where, to make things interesting I told her I had a donkey in my apartment. This interested her a lot. And her questions and my answers became the basis for the book.

The artwork started as full colour but it seemed more attractive to make the palette donkey-themed: a kind of grey and white. Then only add colour where it worked. Red is a classic first colour to add. So it was the default colour. Then occasionally, where it worked to do so, other colours would be used. But always sparingly.

I always liked that, while the book is full of fun and silliness, it is almost totally meaningless. Except perhaps for one thing. As I was creating the illustrations, I noticed that the donkey and the uncle never actually interact. That’s often how it is for a child, where the parents are too busy to pay attention to them, but it raised a curious question. Was the donkey not really there? I decided I didn’t have to answer that, but just leave that possible meaning in the story for whomever might like to see it that way.

As it turned out, in 2018, the great Japanese author Haruki Murakami visited Australia. He noticed My Uncle’s Donkey in a Melbourne bookshop and took it home. It seems he saw that possible meaning and was pleased by it, to the extent that he decided to translate the book into Japanese with the implication that the donkey isn’t real but a kind of spirit donkey. At least that’s my understanding – I’m still to properly translate the Translator’s Notes, a booklet that goes with the Japanese edition. Either way, it’s a nice example of the good that can come from not pinning down meanings to firmly – let them hover like butterflies over the pages, and leave it to the reader to make up their own mind. 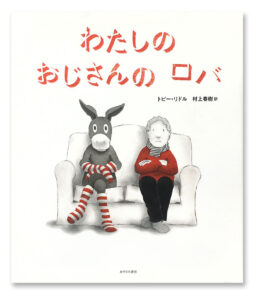 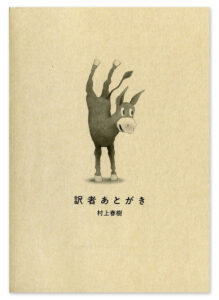 RESOURCE
Notes on the Making of My Uncle’s Donkey [PDF]