The Great Escape from City Zoo 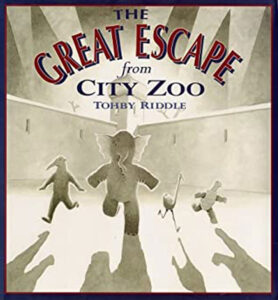 First published in Australia by HarperCollins Publishers in 1997.

‘A quirky plot and monochromatic, olive-toned illustrations set a 1920s mood for this understated tale. When four unlikely companions, an elephant, a flamingo, an anteater and a turtle escape from a zoo, they roam the city streets clothed in a variety of outfits (the anteater dons chef’s garb, the turtle a sailor’s uniform) “so that no one would notice them … so that they could blend in.” This ironic tone informs Australian author and artist Riddle’s compositions as well: the quartet watches King Kong on the big screen, checks out a museum with paintings by the likes of De Chirico and Magritte, and sits around an Edward Hopper-inspired bar. The sophistication of many of the jokes may make the book most popular with adults, but the characters themselves exude kid appeal. The elephant borrows the simplicity of line of Babar; his wan smile betrays the foursome’s feeling of displacement outside of their zoo home. Youngsters will also respond to the broad humour as the zookeepers capture the anteater when he faints in front of a taxidermist’s window (a sign reads, “You snuff ’em, We stuff ’em”), the elephant when he can’t resist cavorting in a Western town’s fountain and the turtle when he falls on his back at a truck stop and can’t get up. The closing “unconfirmed sightings” of the flamingo as a kind of Loch Ness Monster, a familiar-shaped lawn ornament and a figure adorning the top of a Vegas-style Flamingo casino will likely prompt laughter across the board. Riddle’s background as a cartoonist serves him well; each finely honed illustration tells its own brief story.’
– Publishers Weekly

‘This is a book that will have adults pausing to savour the pages as children race to the exciting conclusion.’
– Kirkus Reviews

Featured in 1001 Children’s Books You Must Read Before You Grow Up (Universe/Rizzzoli International, 2009) and Bottersnikes and Other Lost Things: A Celebration of Australian Illustrated Children’s Books (Melbourne University Press, 2009)